Bill
February 2016 edited February 2016 in Techniques
I've spent the last few months working on non-SW projects for my home layout, but I wanted to share something with all of you that I think will be useful when it comes to hand laying track on your next diorama.

The difference in the look you get from hand laying vs. plopping down a length of flex track is huge. In every manual, Brett recommends hand laying rail onto wooden ties (It makes sense...we're all in the board-on-board method of model building. Why limit that process to just structures?) He writes about "the natural inconsistencies of hand laid track" truly capturing "the backwoods logging environment". In the past, I just used the "flex-track short cut" in order to get the track part done and out of the way. While I hand laid the track on my recent Deer Creek mine diorama, I didn't get it centered as precise as I wish I had. It's one of those little things nobody notices, but it's right there SCREAMING at me--you know what I mean?

Here's a little process I tried that I wanted to share and motivate you to go the hand laying route. It combines both flex-track and hand laying rail. The end result is track with centered rail but still yields "natural inconsistencies." I used the technique on a non-SW bridge project. The bridge needs to align perfectly with the existing track on my layout. However, I think you'll see that this method can be just as effective on a diorama.

I began with a piece of code 83 MicroEngineering flextrack. TRather than handlaying all the rail, using the flextrack gave me a starting and end point at each end of the bridge that I knew was truly in gauge. The first step was to gauge and straighten the piece of flextrack. 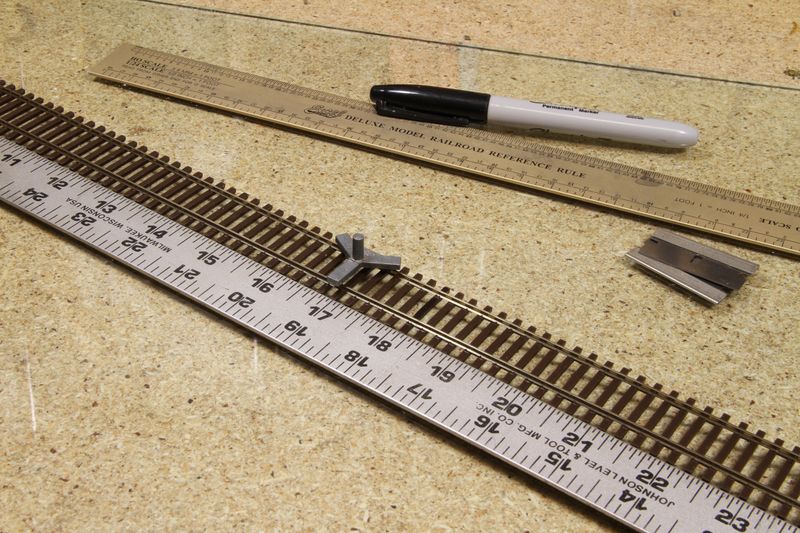 Next, I removed the plastic ties from the middle of the flextrack in the area that would fasten to the wooden bridge ties. The entire piece was painted with Rust-Oleum Camouflage "Earth Brown". 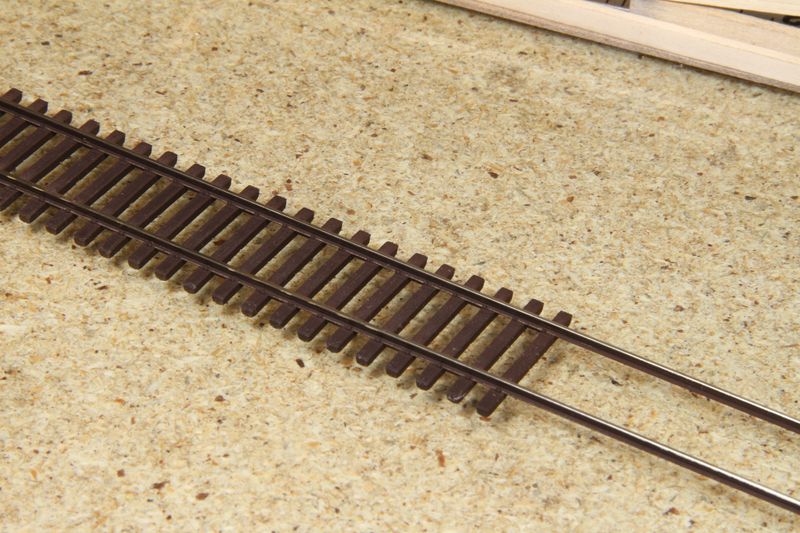 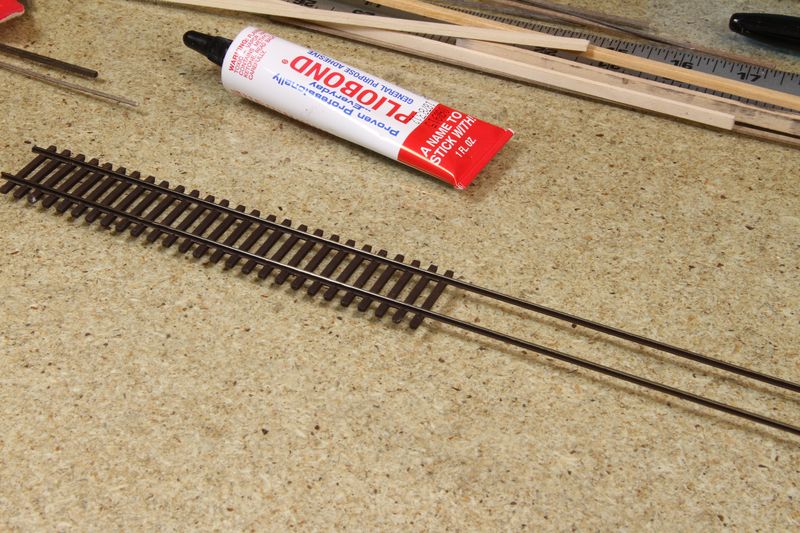 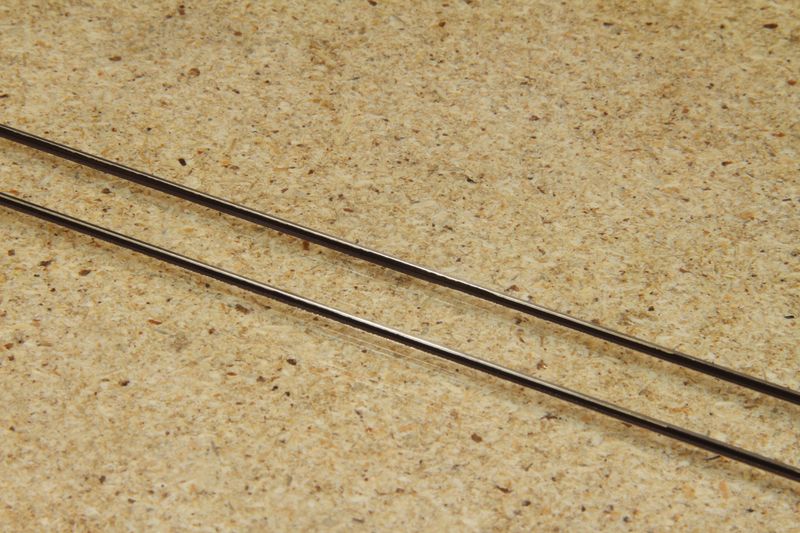 To locate the position of the rails on the bridge ties, I used a short piece of code 83 track. After centering the track on the ties, I made small hash marks at the rail ends. Then ran a pencil line for both rails down the entire length of the deck. 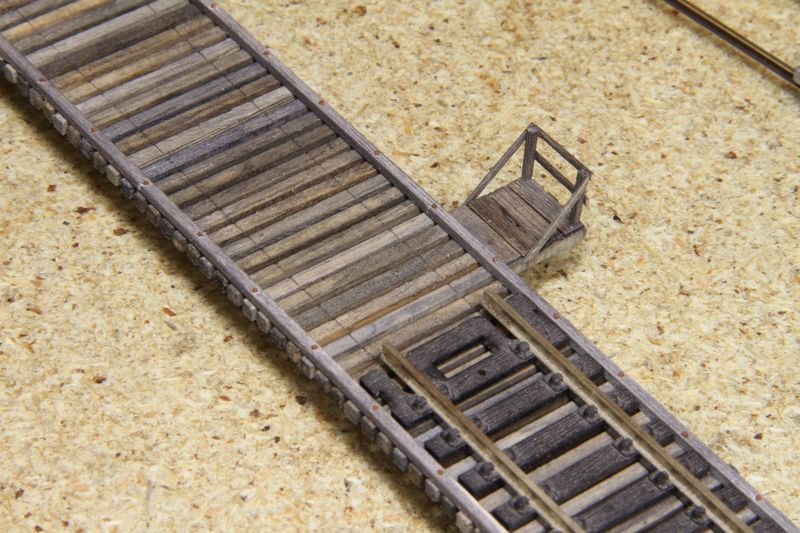 To fasten the rails to the ties, I used "Pliobond". This is a rubbercement adhesive that's pretty thin and runny--about the consistency of a medium or gel CA. I'd never heard of Pliobond but Tim Warris from Fast Tracks recommends it. I used a CA applicator tip on the end of the Pliobond tube. That's KEY to this entire process and allowed me to lay a thin, neat bead of the glue. The specific tip I used was a CA applicator tip from Hobbico. I had to heat it up over an open flame in order to get the tip to slip onto the end of the tube. Both Pliobond (about $4) and Hobbico CA applicator tips (about $2)can be found on eBay or Amazon.com 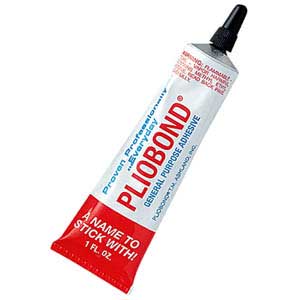 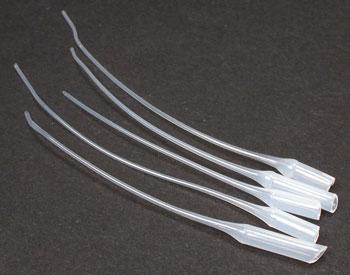 Here's how precise the bead of adhesive is when using these applicators: 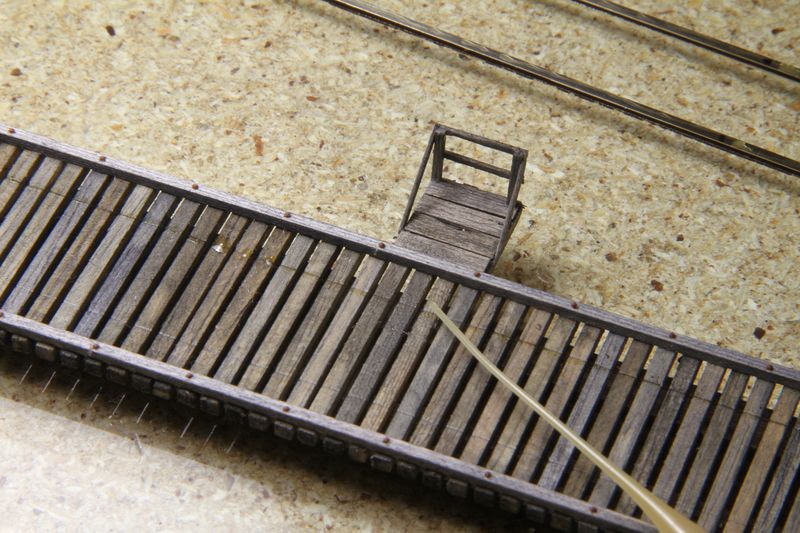 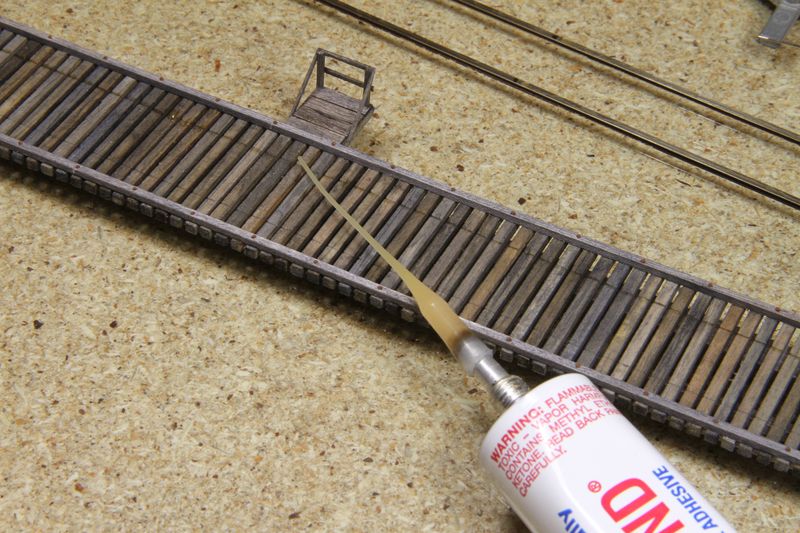 I should also point out, you don't need to squeeze at all. Just let gravity draw it out. Keep moving the tip down the line of ties or rail. If you stop, a "blob" will form. Wipe it off with a paper towel and immediately resume applying the adhesive. Do this and you'll get a perfect neat bead of cement.
Like other contact cements, Pliobond needs to be applied to BOTH surfaces (in this case the bottoms of the rails and the tops of the ties) and allowed to dry. The instructions also suggest a second application if a surface is porous (like wood). So I added a second thin bead to the ties and allowed it to dry completely. Here's a close up of the line of adhesive on both sides of the ties: 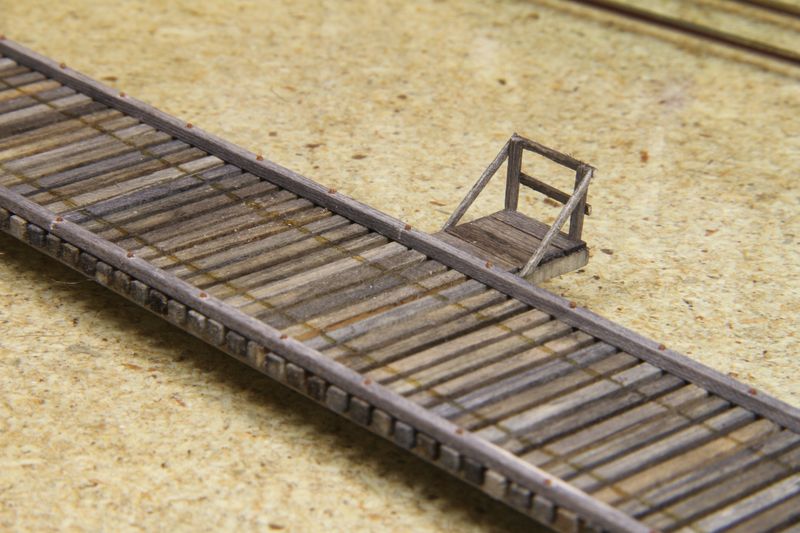 You're also instructed to add a layer of adhesive just prior to attaching to two materials. Once this application starts to get tacky, both surfaces can be assembled. I made sure to keep a couple of track gauges on the rails and worked from left to right. I used a piece of scrap wood to keep the rails on the right side from making contact with the adhesive until I was ready to attach them. 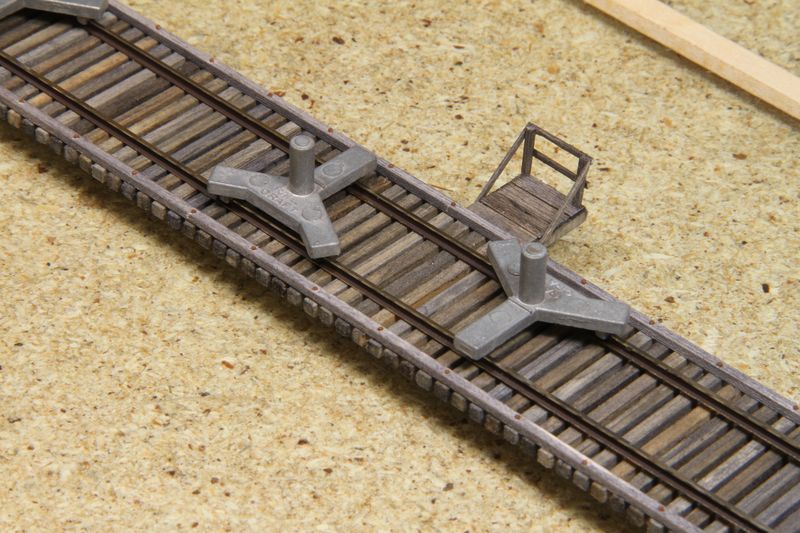 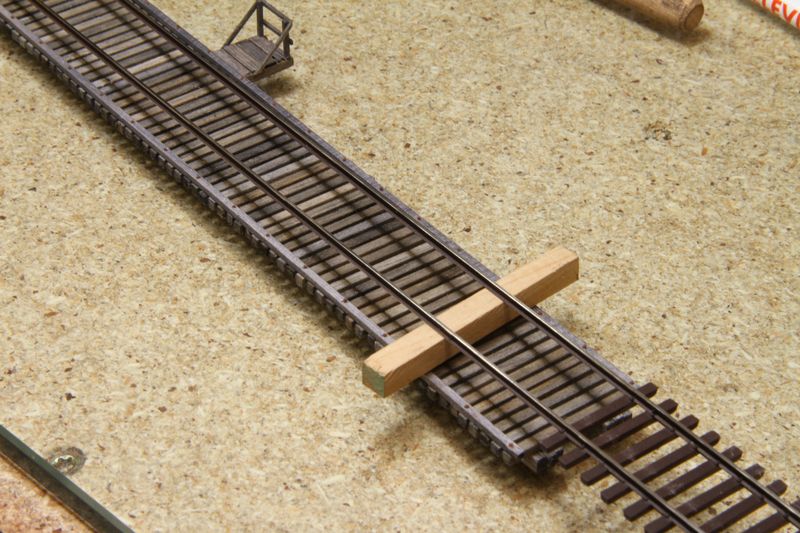 With the rails in position, I used a steel ruler and some weights to apply pressure while the glue dried overnight. 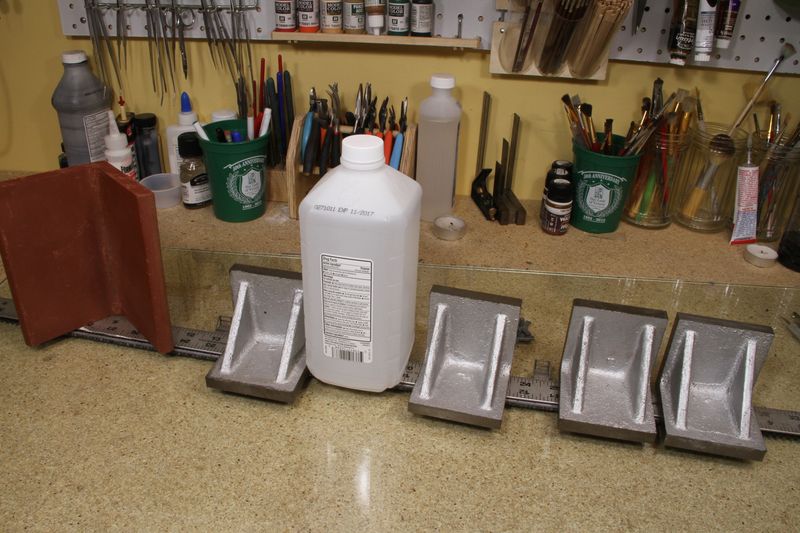 With the rails glued in place and properly gauged, I wanted to insure they stay that way. I opted to spike the rails down using ME micro spikes. First, I drilled a pilot hole for the spikes using a .0197 bit chucked into a Dremel. 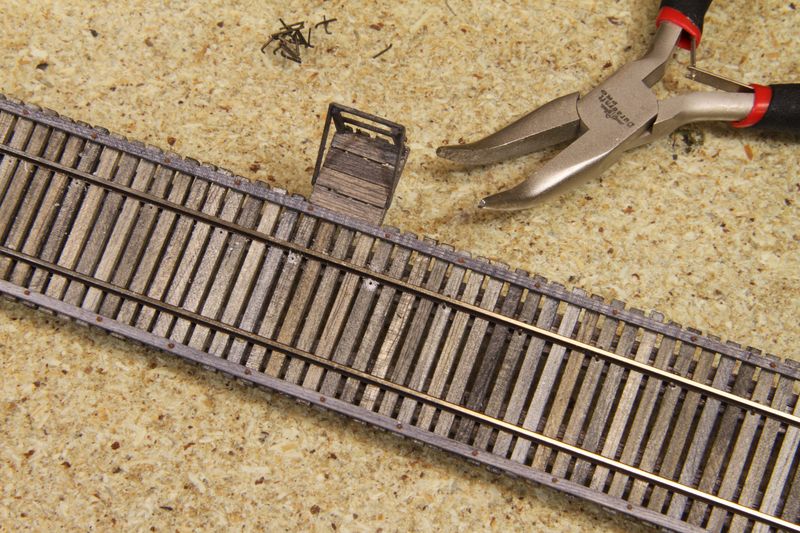 I started adding spikes (every 5th tie) using a pair of Xuron spiking pliers. However, switching to an angled pair of needle nosed pliers worked much better. I believe these are called "angled half round pliers". They have just the right angle to drive the tiny spike home into the ties. 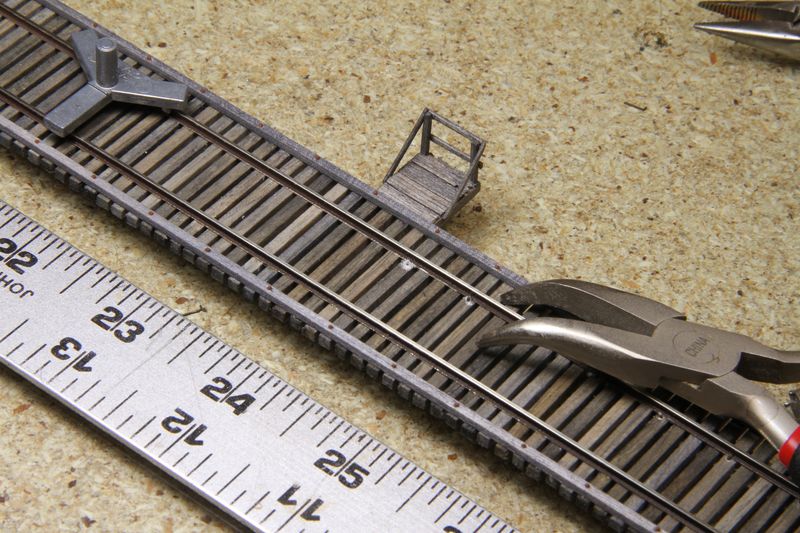 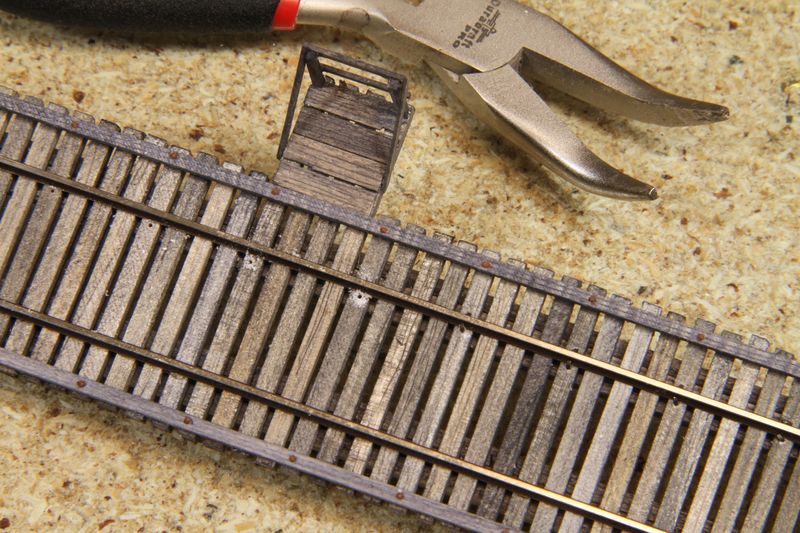 It was slow going at first, but I quickly got the hang of it. I'd guess it took me about an hour to spike the rail to the deck of the bridge. Here's how it turned out: 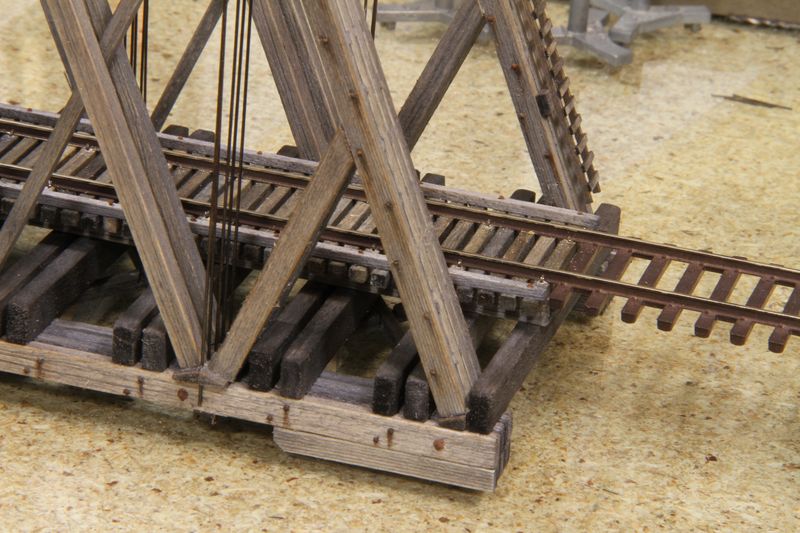 If the project you're working on doesn't require connecting to existing track, cut off the flextrack with a Dremel or a Zona saw. Yes, this wastes a perfectly good 3 foot length of flextrack. They cost probably $4 or $5 these days. A couple pieces of rail will run $2--maybe $3. But for me it's money well spent. Until I get a little more comfortable completely hand laying rail, this "training wheel" approach works pretty well.